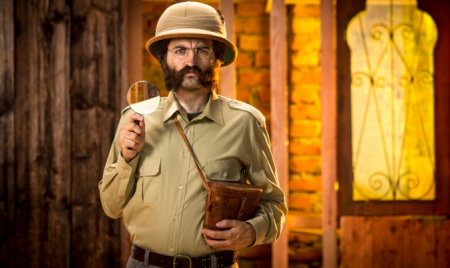 Today’s Groupon Calgary Daily Deal of the Day: Escape Hour Calgary: $99 for a Private Room-Escape Game for Six or $119 for Eight (Up to 40% Off)

After purchasing this deal, you will need to visit the website listed on your Groupon voucher to complete redemption.

This is a limited 2-day only sale that will expire at midnight on Friday October 14, 2015.

The Fine Print
Promotional value expires 90 days after purchase. Amount paid never expires. Limit 1 per person, may buy 1 additional as gift. Online reservation required. Subject to availability. Please arrive 15 minutes prior to scheduled time. Merchant is solely responsible to purchasers for the care and quality of the advertised goods and services.

Escape Hour Calgary gives folks the chance to break through the screen and immerse themselves in the kind of rich world normally reserved for video games or cinematic blockbusters. But unlike even the most immersive video games, everything you see is playable, whether you’re aboard an interstellar spaceship, in the jungles of Zanzabar, or trapped in a speakeasy. Here’s a closer look at the rooms:

The Lost Jewel of Zanzibar (Difficulty Level 2): Magnus Ferguson has gone missing. As it turns out, the brash treasure-hunter-slash-British-Museum-curator ran afoul of a warlord, perhaps after gloating to the locals about how he planned to turn their fabled ruby into Her Royal Majesty’s 12-sided dice. You’ve mounted a rescue mission, but it’s too late for headstrong Magnus. Luckily, he left a few mysterious clues behind as to the whereabouts of the priceless jewel.

The Curse of the Evil Genie (Difficulty Level 3): You and your ragtag group of nomads can’t believe your luck. You’ve stumbled across a bona fide magic lamp. Only problem is, the genie is less of a wise-cracking buddy and more of a devious sociopath. Now you’re trapped in his lamp, and the only way to escape is to somehow decipher which 10 of the 1,001 tales in Arabian Nights are the genie’s favorites.

Prohibition—The Lucky Duck (Difficulty Level 4): Welcome to prohibition-era Calgary. You and a team of vice squad agents are hot on the heels of the nefarious crime boss who’s been supplying all the blind pigs in town with hooch. But just as you’ve narrowed the search down to 10 suspects, the wily kingpin gets one over on you, locking you in a room with a bomb. You’ve got 60 minutes to diffuse the bomb and discover the identity of the man who’s trying to kill you.

Cypherspace (Difficulty Level 5): You wanted to see the galaxy, but it looks like the only thing you’ll see is the galaxy’s destruction. A super-massive asteroid, somehow 10 times bigger than the sun, is threatening to gate crash an intergalactic wormhole. Armed with little more than a renowned physicist’s decades-old theory, you’ve got to figure out a way to close the wormhole—or die trying.