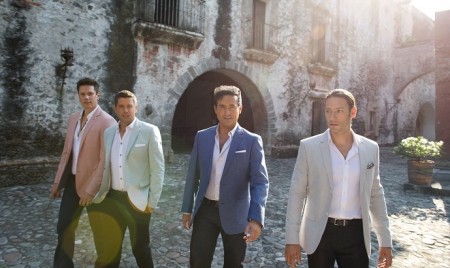 In a Nutshell
World-renowned classical-crossover group melts hearts with sultry tangos, mambas, and boleros from their latest, Amor & Pasión

The Fine Print
Promotional value expires Nov 9, 2016. Limit 4/person. Refundable only on day of purchase. Must purchase together to sit together. Merchant reserves right to substitute closer seat. ADA seating cannot be guaranteed. Contact box office prior to purchase for availability. Holder assumes all risk in connection with the event and releases Groupon, Live Nation, venue and their affiliates from any related claims. Not redeemable on mobile app. Ticket value includes all fees. Discount reflects Live Nation’s current ticket prices, which may change. Merchant is solely responsible to purchasers for the care and quality of the advertised goods and services.

The Men of Il Divo: American tenor David Miller (an opera singer who made his mark in Luhrman’s La Boheme on Broadway), Spanish baritone Carlos Marín (child prodigy, stage and opera star), Swiss tenor Urs Bühler (multi-instrumentalist and former heavy metal frontman), and French pop star Sébastien Izambard.
The Il Divo Story: Strangers when Simon Cowell brought them together in 2003—brothers the instant their voices merged into one. Daring to meld opera and pop in their multilingual debut, the group surpassed all hype and expectations by topping the charts in 12 countries.
Il Divo’s Greatest Successes (So Far): 30 million albums sold, 160 gold and platinum certifications in 33 countries, and a roster of famous fans that includes Her Majesty the Queen, President Obama, Barbara Streisand, Bill and Hillary Clinton, Tom Hanks, and Robert DeNiro
Amor & Pasión: Il Divo’s ambitious seventh album, which finds the foursome exploring the sultry rhythms of Spain, Cuba, Argentina, and Mexico. Tangos, mambas, and steamy boleros include a take on Julio Iglesias’s ”A Las Mujeres Que Yo Ame (To All the Girls I’ve Loved Before),” a fiery Latin reinvention of Beethoven’s “Ode to Joy,” and the classic tango “Volver.”
Il Divo’s Thoughts on the New Album: Sébastien says, “In the studio, singing every track, I really wanted to dance…. They’re super sexy arrangements. It’s a sexy album.” David says, “The Spanish language lends itself to our music…. There’s something very special about it.”