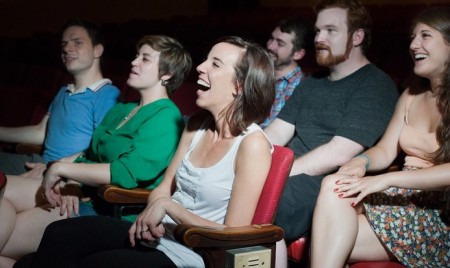 When ADHD Sketch Comedy Calgary is on stage, Dickens Pub is no longer a pub. Instead, it’s a school, an office, a cult compound, a serial killer’s crime scene, or all of the above depending on the school district’s budget. Next month, it might be a hot tub, a political press conference, and then a therapist’s office.

This is a limited 4-day only sale that will expire at midnight on Sunday, January 11, 2015.

In a Nutshell
Performers show off new, five-minute original sketches at each show, inspired by Saturday Night Live and Kids in the Hall

The Fine Print
Expiration varies. Limit 1 per person. Valid only for option purchased. Redeem starting day of show for a ticket at venue box office. Must show valid ID matching name on Groupon at Dickens. Refundable only on day of purchase. Discount reflects ADHD Sketch Comedy’s current ticket prices-price may differ on day of the event. Doors open at 8PM. For ADA accommodations, call box office promptly upon receipt of voucher – availability is limited. Merchant is solely responsible to purchasers for the care and quality of the advertised goods and services.

There’s absolutely nothing Dickensian about the food at Dickens Pub. In place of gruel you’ll find gourmet comfort foods: lobster mac and cheese, mini Yorkshire puddings stuffed with slow-cooked Angus beef, and a fry bar with a dizzying number of potato shapes, flavors, and toppings.

So where’s the pub’s namesake novelist come in? Maybe in the cast of memorable characters you’re likely to encounter there. Several shows a week highlight an eclectic lineup of musicians and comedians. Depending on the evening, you might find yourself bopping to Britpop DJs, headbanging to metal bands, or chortling at zingy sketch comedy.