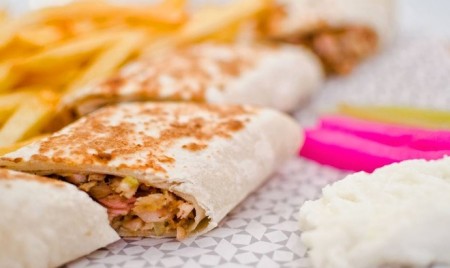 Ethnic restaurants provide a taste of variety for everyone not lucky enough to travel frequently or secretly live in the United Nations food court. Have a far-flung feast with this Groupon.

In a Nutshell
Grilled saj bread filled with traditional or creative toppings, such as strained yogurt and dried mint, or sundried beef and petit pickles

The Fine Print
Expires 120 days after purchase. Limit 1 per person. Limit 1 per visit. Limit 1 per table. Valid only for option purchased. Not valid with any other specials. Merchant is solely responsible to purchasers for the care and quality of the advertised goods and services.

Every piece of traditional saj begins as a large disk of evenly kneaded dough. The flat circle bakes atop a convexly domed griddle—also known as a saj—until the thin, pita-esque flatbread is golden brown. From there, this flat-bread can be topped with meats, vegetables, herbs, spices, and sauces and then folded to create Levantine-style wraps.

Two Syrian restaurateurs brought this small taste of home to the West by founding A La Saj. The menu includes a number of traditional choices featuring everything from falafel and homemade tahini sauce to red pepper paste, nuts, and spices. However, A La Saj also injects a bit of local character into its menu by offering Canadian-themed selections—specifically, The Canadian, topped with maple-seared turkey breast, cheese, home-made maple dijon, and sheet music for the national anthem. A handful of dessert options can end meals on a sweet note, indulging taste buds with fillings of nutella or honey and ricotta cheese.