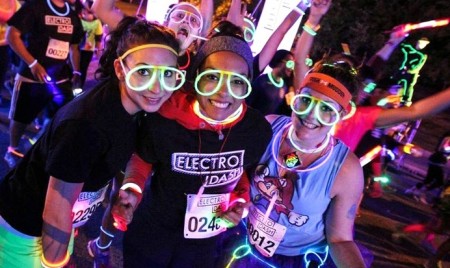 Today’s Groupon Calgary Daily Deal of the Day: ElectroDash: $29 for Entry to the ElectroDash 5K on Friday, September 12 at Canada Olympic Park (47% Off)

When people rally together, they can accomplish anything, such as building the pyramids, going to the moon, or eating an entire party sub. Team up for good with this Groupon.

Runners donning neon and glow-in-the-dark garb converge at Canada’s Olympic Park to experience a mind-blowing 5K night course. The first wave of runners departs at 8 p.m., and a subsequent waves leave every 15 minutes to 8:45 p.m. Runners receive a T-shirt, a pair of glow glasses, and a glow bracelet. After competitors cross the finish line, they can get down at the post-race party with DJ tunes.

The Fine Print
Expires Sep 12th, 2014. Limit 1 per person. Limit 1 per visit. Must sign waiver. Online registration required by 9/12/2014. Race day is 9/12/14. Merchant is solely responsible to purchasers for the care and quality of the advertised goods and services.

The ElectroDash’s organizers score their 5K night runs with the most appropriate soundtrack: electronic dance music. The pulsing beats, which can be heard at runs throughout Canada and the United States, attract runners to tackle the neon-light illuminated course. On the track, a slew of light displays, lasers, fog tunnels, projected images and black lights highlight competitors’ eye-dazzling accessories, including neon duds, glow-in-the-dark glasses, and water bottles filled with an excited anglerfish. Though the ElectorDash’s main mission is fun, it also champions giving back to the community by donating a portions of the proceeds to support a local charity.