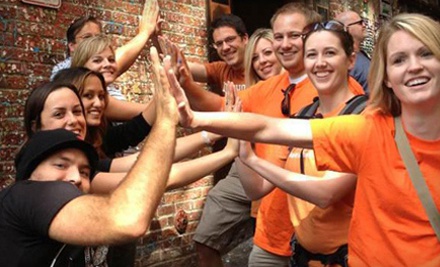 Scavenger hunts are the best way to get to know a city, just ahead of spending six months living with the mayor in the city sewers. Hit the streets with this Groupon.

Teams take to the streets of Calgary on Saturday, August 24, to compete in the Urban Goose Chase. The starting location will be revealed via email in the days leading up to the event, which challenges adventurous competitors to race the clock to finish as many wacky and daring missions as they can throughout the city. Teams should bring their mobile devices and clad themselves in orange—the competition’s signature colour—to gain bonus points.

This is a limited 5-day only sale that will expire at midnight on Thursday, August 22, 2013. Click here to buy now or for more information about the deal. Quantities are limited so don’t miss out!

The Fine Print
Expires Aug 22, 2013
Limit 10 per person, may buy 10 additional as gifts. Online registration required. Valid for teams consisting of up to 6 members. Team reservations should be made at least 48 hours in advance; no reservations will be accepted after expiration.

A curious madness has taken hold of average citizens in North America, the UK, and South Africa. Groups of adults rove the city in packs, staring down at their smartphones before impersonating tapanaki chefs at a coffeehouse condiment counter and knitting with plastic bags. This is an Urban Goose Chase.

The taskmasters at Urban Goose Chase turn the notion of a traditional scavenger hunt on its ear by communicating with teams via an Android- and iPhone-compatible app. Event instructions are sent out 48 hours in advance; teams download the app and receive a variety of missions from which they can select. Successfully completed missions earn teams the points they need to gain rank on the leaderboard and win the $300 first prize. During the chase, each team’s standings are updated in real time and visible to other teams, creating a sense of urgency, much like wearing an hourglass in place of a wristwatch.