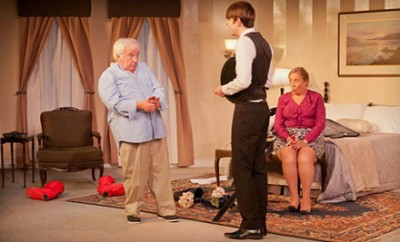 Today’s Groupon Calgary Daily Deal of the Day: Lunchbox Theatre: $20 for Two Tickets to a One-Act Play (50% Off)

See an actual stage with this GrouponLive deal to Lunchbox Theatre. For $35, you get two general-admission tickets to a one-act play (an $80 value). Tickets are valid during the first week of each production.

Performances run at 12:10 p.m. every Monday–Saturday, at 6:10 p.m. on Fridays, and at 7:30 p.m. on Saturdays. Doors open 30 minutes before showtime. This Groupon is valid for any performance in the first week of the following shows:

This is a limited 5-day only sale that will expire at midnight on Thursday, November 29, 2012. Click here to buy now or for more information about the deal. Quantities are limited so don’t miss out!

In a Nutshell
World-premiere one-act musicals, comedies, and dramas designed to fit into a lunch break, running from February through May

The Fine Print
Expires Jun 1, 2013
Limit 2/person. Reservation req’d 24hr in advance, subject to avail. Redeem at venue box office. Must show valid ID matching name on Groupon at Lunchbox Theatre. Must provide full name at checkout, which Groupon will provide for redemption of voucher. Refundable only on day of purchase. Discount reflects theatre’s current ticket prices-price may differ on day of the event. Must use value in 1 visit. Valid only 1st week of play. Not valid for “OH! Christmas Tree” or “Blanche: the Bittersweet Life of a Wild Prairie Dame”

He Said, She Said (February 4–10)
Frequent company writer and director Glenda Stirling and Neil Fleming are the two cross-chromosomal collaborators behind He Said, She Said, an attempt at translating the constant miscommunications of an archetypal male-female relationship. Fleming, whose fluency in domestic matters was showcased as head writer on the Food Network’s Fixing Dinner, has long specialized in one-act plays that tease out the absurdities in everyday life.

Scarlet Woman (March 4–10)
Matthew Wells’s noir-styled mystery throws two actresses into the over-the-top parts of a dozen scheming ladies and piles up nearly as many dead bodies. Sardonic secretaries, tough-talking detectives, and dizzy ingénues fill the stage with melodramatic gestures and dialogue that scrambles hardboiled dialogue tropes to comic effect. The Winnipeg Free Press praised the lines that “come as fast and furious as the costume and character changes” and the humour that “never disrespects the genre by descending into silliness” in a review of a 2011 production.

If I Weren’t With You (April 1–7)
If I Weren’t With You is a new musical comedy from Joe Slabe, founder of Calgary’s own Forte Musical Theatre Guild and the scribe behind 2005’s Austentatious. Locked in decidedly mediocre matrimony, one couple imagines in song what could have been if they’d only opted for the single life. Slabe’s writing has been described by Stephen Hunt of the Calgary Herald as “sharp, funny, and once in a while heartbreaking.”

Almost a Love Story (April 29–May 5)
Calgary Sun theatre and film reviewer Louis B. Hobson delves into writing original work of his own with a play explores the compromises and contradictions of family life. After his beloved father’s death, David discovers he and his mother are joined in their mourning by a third figure: his father’s lover, Callum.

Emerging Directors Showcase (May 29–June 1)
A to-be-determined full-scale production will demonstrate the growth of a new directing talent who has spent the season soaking up the tricks of the trade as assistant director. Tickets to this production are regularly $10 each.