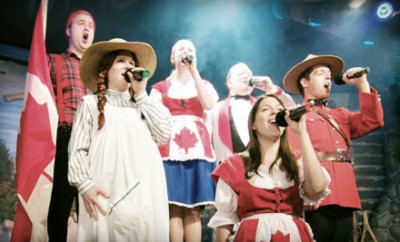 This is a limited 5-day only sale that will expire at midnight on Thursday, October 11, 2012. Click here to buy now or for more information about the deal. Quantities are limited so don’t miss out!

The Fine Print
Expiration varies
Limit 4 per person, may buy 4 additional as gifts. Limit 1 per visit. Valid only for option purchased. Reservation required; subject to availability.

Each package includes the following:

Choose between the following shows:

Shows run from 6:15 p.m. to 9 p.m. Each adult ticket grants free admission for one child aged 3–16, and kids 2 or younger are admitted free. Additional children get in for $40 each.

Within Cornerstone Theatre’s 6,000 square feet of raw Manitoba barn board and Alberta pine exists one of the world’s only opportunities to be served a steaming hot meal by a singing mountie. The tuneful do-gooder is joined by one of Green Gables’ many Annes, a melodious hockey player, the inimitable Klondike Kitty, and other wacky national characters in the Oh Canada Eh? dinner show. Over its 10-season run, the show has evolved to take in charting pop hits along with maritime folk songs and a rousing national-anthem closer.

Between bouts of onstage hilarity, the performer/servers whoosh from table to red-checkered table bearing an authentic Canadian feast, from an opener of French Canadian–style pea soup to entrees that include Alberta–style roast beef and Manitoba–style roast chicken. Humming along between bites, diners can sample any course they like and are welcome to ask for seconds. A round of maple-chocolate cake wraps up the extravaganza while providing an edible lumberjack beard of frosting.

Aside from the raucous Oh Canada Eh? dinner show, Cornerstone Theatre’s schedule also fills up with other special events such as Comedy Night, where stand-up comedians who have appeared on television launch their punch lines toward funny bones. Patrons can also rent out Cornerstone Theatre for special events of their own, such as wedding receptions, private parties, and corporate meetings.