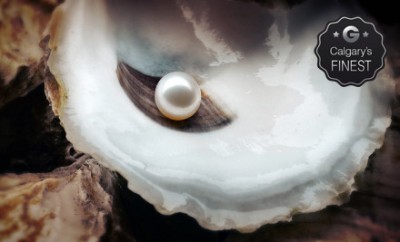 This is a limited 5-day only sale that will expire at midnight on Friday, October 19, 2012. Click here to buy now or for more information about the deal. Quantities are limited so don’t miss out!

In a Nutshell
Chefs and wine experts demonstrate tips for seafood prep, such as how to shuck oysters or pair wines, then send students home with a recipe

The Fine Print
Expires Dec 29, 2012
Limit 1 per person, may buy 1 additional as a gift. Reservation required, subject to availability. Must use promotional value in 1 visit. Events limited to a maximum of 20 people. Valid only on Saturdays.

During #PearlsofWisdom sessions, instructors showcase various techniques for crafting impressive seafood dinners. Lessons cover such topics as shucking oysters, filleting fish, pairing the perfect wine, and blending flavourful sauces. Students sip on a glass of sparkling wine as they absorb culinary strategies, which they can later test at home with an exclusive restaurant recipe handed out at the end of the lesson. Sessions run on Saturdays from 3 p.m. to 5 p.m.

At Catch & the Oyster Bar, the first floor’s casual, neighbourhood environment resounds with friendly chatter and the crackle of shells being shucked amid the oyster bar’s sandstone walls. The second floor, on the other hand, offers a more sophisticated restaurant setting, where industrial-chic elements, such as metal shelving and lofty ceilings, serve as conversation pieces as guests dive into a dinner menu of artfully assembled seafood entrees. No matter where diners prefer to sit, they can experience Catch & the Oyster Bar’s continent-spanning cuisine, including Nova Scotia lobster, dungeness crab from British Columbia, and coastal fish that arrive daily by plane or T-shirt cannon.

In the kitchen, Executive Chef Kyle Groves keeps his culinary approach simple by allowing natural ingredients—such as herbs harvested on the restaurant’s rooftop garden—to speak for themselves without being muddled by too much complexity. The chef’s creations and mastery of European cooking techniques have earned the restaurant multiple awards for its seafood, and a top-five spot on Calgary’s Top 10 Restaurants of 2012 in Avenue magazine.