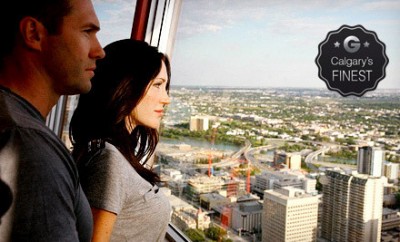 Today’s Groupon Calgary Daily Deal of the Day: Calgary Tower: $22 for Historic-Tower Visit for a Family of Four (50% Off)

This is a limited 5-day only sale that will expire at midnight on Sunday, October 21, 2012. Click here to buy now or for more information about the deal. Quantities are limited so don’t miss out!

In a Nutshell
191 metres above the city, a glass-floored observation deck lets visitors soak in sweeping 360-degree views and complimentary tours

Two adults and two children can step onto the glass floor of the observation deck for a view of the streets from 191 metres above, or take in 360-degree views from high-powered binoculars. Complimentary tours, which require a reservation, illuminate Calgary’s history, landmarks, and future plans. Children aged 3 and younger are regularly admitted for free.

In 1988, the top of the Calgary Tower was on fire. Nobody panicked, though, and no one tried to put out the flames. If they had, and succeeded, it would have been to the disappointment of athletes and spectators the world over, because that flame burned in honour of Canada’s first Winter Olympic Games. At 191 metres above the city, the light that fire produced—flickering from a gas-fired cauldron—served to unite the city around the games, to honour the spirit of sportsmanship, and to safeguard the event from Mothra attacks.

Today, visitors can see the city from just below where that torch burned. After a 63-second elevator ride to the top, guests can explore the observation deck, take a complimentary tour, and peer from high-powered binoculars at the Rocky Mountains, foothills, and prairies. Then they can step out onto the glass floor and stare down at the Olympic Plaza, the Glenbow Museum, and the bald spots on park monuments.

Yet the tower’s height isn’t its only draw. From the ground up, it strives to showcase the best of the city. At the base, the visitor information centre furnishes newcomers with city guides that point to popular attractions, and at 155 metres, the elegant Sky 360 restaurant fans romantic sparks as it completes its 360-degree rotation every hour.