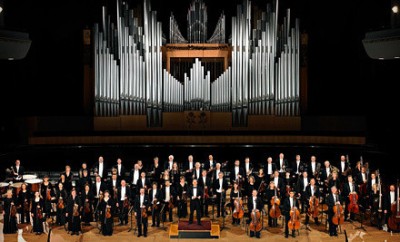 Today’s Groupon Calgary Daily Deal of the Day: Calgary Philharmonic Orchestra: $19 for One or $49 for Three Rush Hour Orchestra Performances (53% Off)

This is a limited 5-day only sale that will expire at midnight on Saturday, October 6, 2012. Click here to buy now or for more information about the deal. Quantities are limited so don’t miss out!

In a Nutshell
Under celebrated conductors, casual, one-hour concerts delight audiences with works by composers such as Beethoven and Gustav Holst

The Fine Print
Expiration varies
Limit 4 per person. Valid only for option purchased. Phone reservation required by 5PM on 10/11. Once reserved, bring Groupon to venue to pick up ticket. Must show valid ID matching name on Groupon at Jack Singer Concert Hall. Must provide first and last name at checkout, which Groupon will provide to facilitate redemption of voucher. Refundable only on day of purchase. Must purchase together to sit together. Discount reflects Calgary Philharmonic Orchestra current ticket prices-price may differ on day of the event.

Under the graceful baton of music director and conductor Roberto Minczuk, the Calgary Philharmonic Orchestra delights audiences of all ages with a broad repertoire of classical and contemporary orchestral works. A series of casual Rush Hour performances hosted by the CBC’s Katherine Duncan helps patrons scrub ears clear of workaday sounds such as clicking keyboards and gossiping water coolers with mellifluous one-hour concerts. Beethoven’s Piano Concerto no. 4 treats cochleae to a hearty slice of the composer’s undulating piece. Set in G Major, the composition evokes a range of emotions as its ivory twinkles move from slowed introspection to rapid-fire playfulness. A slowly climbing crest of violins and flutes infuses the euphony with dramatic flair.

During March’s “Opera Hits,” soprano Sally Dibblee and tenor Luc Robert belt out easily recognizable operatic pieces, letting audiences prove to themselves that they know a good deal about the often intimidating art form simply from having watched television, movies, and Placido Domingo’s blooper reel. In May at “Symphonic Space,” conductor Rossen Milanov guides the Women of the Calgary Philharmonic Chorus as they execute composer Gustav Holst’s The Planets, an ode to the solar system that examines the vast possibilities of the stars and the role they play in astrology and horoscopes.