Wow! Our friend Chris Myden over at Y Deals has done it again. He found and posted an incredible vacation/flight deal on his blog. Hurry! This is one of those deals you should take advantage ASAP before it sells-out!

There’s a very interesting Travelocity code making it’s way around the web at the moment. It’s resulting in some pretty great prices, such as 3 night Vegas packages (flight + hotel) over a weekend for $271/person after all taxes & fees (which I’ll show in the example below).

Here’s what I’ve learned about it so far, and my tutorial for taking advantage of it.

To ensure this, you can just go to this link: http://www.travelocity.com/resolve/in/# and select the American site. Put a checkmark beside ‘Remember this selection’

2. Now that we’re on Travelocity’s site we need to think of a destination where taking $200 off of a package price (per person) will result in an amazing price.

Important: The package must be a minimum of 3 nights.

Las Vegas is an obvious first thought, so let’s try that.

3. Now that we’re on the results page, let’s sort the results by price. It looks like the Super 8 Las Vegas package is currently going for $471/person after taxes & fees. Click on ‘Select & Continue’.

4. Scroll down to ‘Book Now’ and click on that.

Scroll down to the bottom and click on ‘Continue’.

5. Now scroll down to Step 3, under ‘Review the price’ and look for the box that says ‘I have a promotional code’. It looks like this: 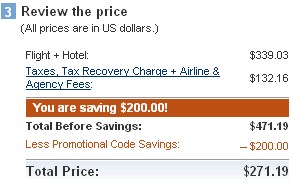 7. After booking, you would repeat this process for the next person.

Here are my thoughts, based on my experience with the Expedia code (which some of you may remember).

– Be aware that one risk is that you book one package with the code, and then Travelocity pulls the plug on the code before you can book the next person. It could happen if the code goes viral. Apparently there is a redemption limit of 3500 bookings.

– You might wish to use separate names and credit cards for each booking, so that Travelocity can’t claim you tried to use the code more than once. If you have a Travelocity account, I’d probably book one using the account, and the other one as a ‘guest’.

– This code looks to work for all flight + hotel packages, not just Vegas. I was just using Vegas as an example as it’s typically one of the more popular and cheaper destinations.

– It doesn’t matter if you end up with a room that you never use. The hotel doesn’t care.
Here are the full terms and conditions of the code:

The promotional code (the Promo Code) for $200 is valid between 12:01 a.m. Central Time on July 2, 2012 and 11:59 p.m. Central Time on August 4, 2012 (the Promotion Period) oruntil it reaches the redemption limit of 3,500 redemptions. Your use of the Promo Code on the www.travelocity.com Web site (the Site) is subject to the Travelocity User Agreement and Privacy Policy. The Promo Code is valid only for qualifying purchases made on the Site. A qualifying purchase means a three-night or longer Hotel+Flight Vacation Package which is offered on the Site during the Promotion Period. Travel dates must be between July 2,2012 and December 31, 2012. Qualifying Hotel+Flight Vacation Package purchase requires a minimum spend of $200 and should be booked immediately following your qualifying air booking.

Click here to visit Chris Myden’s post on his YYC Deals blog or for more information about this incredible deal.