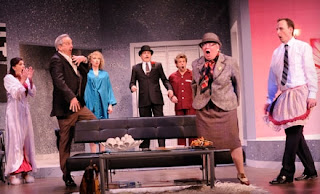 The last time Stage West was featured on Groupon, the deal sold out very quickly. If this deal interests you, I suggest you act quickly in case it sells out again. I hesitated the last time and missed out. I was too busy trying to organize a family outing and all the Groupon vouchers sold out by the time I was ready to buy.

This is a limited 1-day only sale that will expire tonight at midnight (Monday, March 7, 2011). Click here to buy now or for more information about the deal. Quantities are limited so don’t miss out!

The Fine Print
Expiration varies
Limit 6 per person. Valid only for show purchased. Must redeem for 3/13 & 3/15 shows by 3/11; must redeem for 3/29 show by 3/25. Reservation required. Not valid toward alcohol. Seats assigned at box office. Tables may be shared. Tax included.

Today’s Groupon: for $48, you get one dinner theatre admission (a $96.60 value, including GST) to Move Over Mrs. Markham at Stage West Theatre Restaurant. Choose from the following dates:

Stage West Theatre Restaurant elegantly entertains dinner theatre devotees riotous stage productions augmented by a bountiful buffet . As a self-described “sex farce,” Move Over Mrs. Markham plucks at the chortle strings of playwrights Ray Cooney and John Chapman and washes the audience with debauched delights in a clever comedy of errors. Be sure to leave anyone under 18 at home with their St. Bernard chaperone, as this tale of mistaken identities strolls through mature and outlandish situations peppered with lighthearted lasciviousness.

The dinner buffet menu escorts an array of entrees including sushi, roast beef, and rice pilaf, which can double as supplies for an impromptu bouquet of nori roses. The buffet begins at 6 p.m. on weeknights and 5 p.m. on Sunday evening, leaving an hour and forty-five minutes to pile plates and nosh in good company until the performance commences.

Reviews
Stage West Theatre Restaurant’s current production of Move Over, Mrs. Markham has been positively reviewed in the Calgary Sun. Five Yelpers give it a 3.5-star average, and TripAdvisors give it an average of four owl eyes.