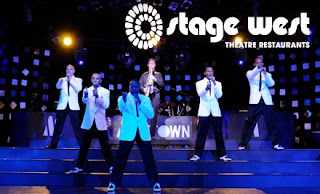 I usually try to catch at least one Stage West performance a year, but haven’t had a chance to yet. I’m going to talk it over with the wife and see if she wants to go to this show. If you have never gone before, it’s worth checking out. It normally costs around $100 per person for a nice buffet dinner and live show. The Stage West buffet is surprisingly very good. I always stock up with a plate full of dessert and slowly munch on it during the performance.

This is a limited 1-day only sale that will expire tonight at midnight (Tuesday, December 14, 2010). Click here to buy now or for more information about the deal. Quantities are limited so don’t miss out!

Today’s Groupon: for $48, you get dinner-theatre admission to Motown Gold: A Musical Revue at Stage West Theatre Restaurant (a $97 value with tax included). Purchase one of the following Groupons:

Each performance at the elegant dinner theatre is preceded by a bountiful buffet, featuring 120 items to dine on, including a sprawling dessert selection. The buffet begins at 6:00 p.m., so pile your plate and nosh in good company until 7:45 p.m., when the performance commences. With a wide-ranging revue of R&B favorites, Motown Gold plucks at audience’s heartstrings and canoodles nostalgic notions of music’s golden age. Hum along to renditions of classics by The Temptations and The Four Tops, or tap toes to the gospel-infused strains of Marvin Gaye. A live band plays Stevie Wonder, The Jackson 5, and others to provide the rhythm for energetic dance numbers, while the blues are provided by a frowny clown softly tapping a glockenspiel. Sup on this cultural bounty yourself, or gift this Groupon to a know-it-all youngster for a healthy dose of his weekly wisdom.

Please note that Stage West has a semi-formal dress code.

Reviews
Stage West Theatre Restaurant was featured by the Calgary Sun. Four Yelpers give it a four-star average and TripAdvisors give it an average of four owl eyes.