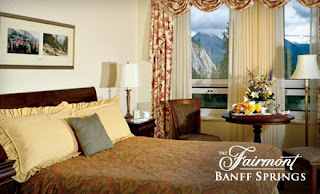 UPDATE: WOW! Even though this deal costs $199, it’s a very hot seller. At the time of this update, they have already sold over 650+ coupons and there’s still well over 3 days to go until the deal expires. At the rate that this deal is selling, it is going to sell out very quickly. I suggest you buy it soon if you’ve been thinking about it.

Today’s Groupon Deal of the Day: $199 for One Night Stay and Breakfast for Two at The Fairmont Banff Springs ($409 Value)

Surprise your significant other with a super romantic gift for Christmas by taking advantage of today’s Groupon Deal. Today’s deal is a bit pricey ($199), but it gets you a One-Night Stay and Breakfast for Two at the luxurious Fairmont Banff Springs Hotel. That’s a savings of $210 or 51% off. I stayed at the hotel a couple years ago and have always wanted to go back. The hotel is breathtaking. I debated all morning if I should buy the deal or not. After I realized how hot of a seller this deal is, I just bought into the deal. I can’t wait to go!

This is a limited 4-day only sale that will expire at midnight on Monday, December 20, 2010. Click here to buy now or for more information about the deal. Quantities are limited so don’t miss out!

Today’s Groupon: for $199, you get a one-night stay and breakfast for two in a Fairmont King room (a $409 value) at this historic hotel known as “The Castle of the Rockies,” located in Banff National Park about 130 kilometres west of downtown Calgary. This Groupon doesn’t cover $54 of hotel fees and GST.

After check-in, adventurous guests can catch a shuttle to one of three nearby ski resorts for a full day of downhill, take a spin on the onsite skating rink, snowshoe through miles of forest trail, or embark on a sasquatch hunt before returning exhausted to warm up in one of the hotel’s heated outdoor pools. If sleepers can bring themselves to rise from their cozy king-size bed, they can zombie-shuffle downstairs to the Bow Valley Grill between 6:30 a.m. and 10:30 a.m. the next morning for a complimentary breakfast of made-to-order omelets, freshly baked breads, and life-sustaining coffee spread upon wooden tables handcrafted by local Albertan artisans. Sweeping views of the Fairholme Mountain Range and a bustling open kitchen give eyes as well as mouths something delicious to chew.

Reviews
Frommer’s recommends The Fairmont Banff Springs. Yahoo! Travellers give it a 4.5-star average. More than 700 TripAdvisors give it an average of four owl eyes.