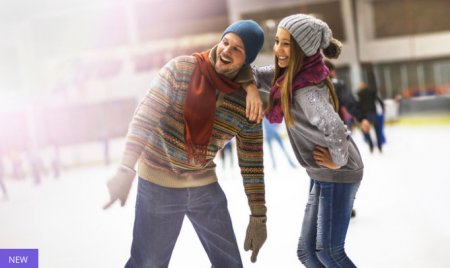 Today’s Groupon Calgary Daily Deal of the Day: Olympic Oval: $9 for Public Skate Session for One, $15 for Two or $20 for Family with Skate and Helmet Rental (Up to 58% Off)

The Fine Print
Promotional value expires Mar 13, 2017. Amount paid never expires. Limit 1 per person, may buy 1 additional as gift. Valid only for option purchased. Merchant is solely responsible to purchasers for the care and quality of the advertised goods and services.

At the 1988 Winter Olympics in Calgary, speed skating made its indoor Olympic debut inside the Olympic Oval. Though that was two decades ago, top athletes from around the world still flock to the Oval to skate, train, and compete on its superior ice.

But you don’t have to be an Olympic athlete to glide around this world-class facility: public skating times open the doors to the skaters of all ages, enabling the entire community to fully experience one of Calgary’s most-iconic sites. Here are some fast facts about the Oval:

It has three different ice surfaces: They include a long-track speed skating oval and two Olympic-sized hockey rinks, which fit neatly inside the oval ice.
The ice is fast: In fact, the Oval refers to its ice as “the fastest in the world”. That’s because the ice here is made with demineralized water, which reduces the amount of dirt and mineral build-up—and thus, friction—between the ice and skate blades.
World records are common: Thanks to the ice’s speed, world records are broken all the time here. In fact, around 300 records have been set in long- and short-track skating over the past few decades.