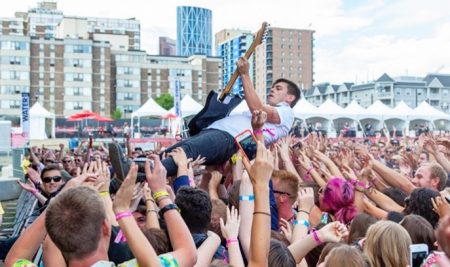 This is a limited 5-day only sale that will expire at midnight on Tuesday, August 30, 2016.

The Fine Print
Expiration varies. Limit 8/person. Valid only for option purchased. Redeem on day of event for a ticket at the venue box office. Refundable only on day of purchase. Discount reflects Ticketmaster’s current ticket prices, which may change. Disability seating cannot be guaranteed; contact box office prior to purchase for availability. Ticket value includes all fees. Must be 18 or older. Merchant is solely responsible to purchasers for the care and quality of the advertised goods and services.

Saturday’s Lineup
The Lumineers: With the can’t-get-it-out-of-your-head sing-along smash hit “Ho Hey,” this Denver folk-rock troupe rose to double-platinum-selling international stardom and earned two Grammy nominations
Vance Joy: The Australian singer-songwriter behind “From Afar” and “Riptide” is currently gaining a lot more fans—he’s been opening for Taylor Swift on her summer 2015 tour.
Also appearing: Arkells | Jake Bugg | Wintersleep
Sunday’s Lineup
Twenty One Pilots: poetry-based musical duo from Ohio utilizes a mixture of piano, synthesizer, drums, vocals, and an occasional ukulele
Halsey: Ashley Frangipane captures the darker, grittier side of New York in electro-pop hits such as “Color” and “New Americana,” earning comparisons to Chvrches and Lorde.
July Talk: garage-laced blues band who was nominated for Breakthrough Group of the Year at the 2014 Juno Awards
Also appearing: July Talk | The Naked and Famous