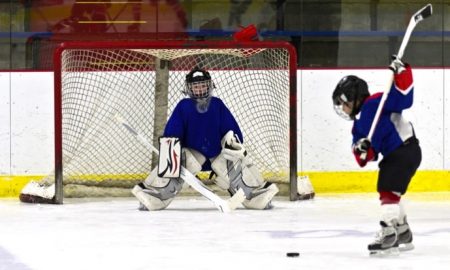 The Fine Print
Promotional value expires Aug 27, 2016. Amount paid never expires. Registration required. Limit 1 per person, may buy 1 additional as gift. Limit 1 per visit. All goods or services must be used by the same person. Valid for ages 6–14. Valid only for Airdrie camp. Merchant is solely responsible to purchasers for the care and quality of the advertised goods and services.

Be sure to warm up your vocal cords—and maybe bring some earplugs—before cheering for the home team. Read on to learn just how loud crowds can get.

It was the closing minutes of the Kansas City Chiefs–Oakland Raiders game in October 2013, and the Chiefs fans were losing heart. Not because their team was down—they were up by nearly 20 points—but because they had yet to break the noise record set by Seattle Seahawks fans just weeks ago. According to the Guinness Book of World Records, the Chiefs fans had to break 136.6 decibels, a level higher than a jackhammer, a rock concert, or a jackhammer-rock concert and almost as high as a jet plane during takeoff. In the final moments, they did it: the meter registered 137.5 decibels.

This could seem like bad news: noise over 130 decibels has been known to cause hearing damage, and athletes often have a hard time hearing each other during huddles during particularly raucous games. The abundance of concrete, glass, and plastic found in most stadiums can further amplify crowd noise.

But some dispute the accuracy of crowd-noise measurements. Paul Richardson of MyNorthwest.com points out that the noise from jet planes is measured from about 50 meters away, wheras Guinness measures crowd noise from a distance of only 2 meters from the endzone, which gives the fans closest to the microphone disproportionate influence over the measurements. If the measurements were taken from where the players congregate on the 50-yard line, Richardson hypothesizes that the Kansas City crowd would have only reached about 106 decibels. And either way, crowd noise can give a huge boost to home-team morale, giving athletes the confidence to score an extra goal or finally investigate that spooky hole under the bleachers.