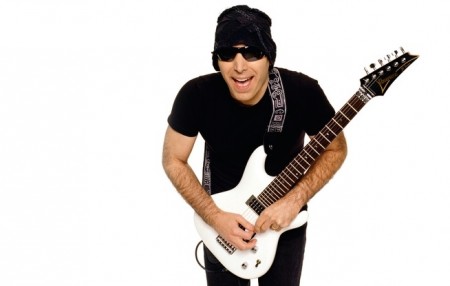 This is a limited 5-day only sale that will expire at midnight on Wednesday, February 10, 2015.

The Fine Print
Promotional value expires Apr 22, 2016. Limit 8/person. Valid only for option purchased. Redeem 4/21 for a ticket at venue box office. Refundable only on day of purchase. Must redeem together to sit together. Discount reflects merchant’s current ticket prices, which may change. ADA seating cannot be guaranteed; contact box office prior to purchase for availability. Ticket value includes all fees. Merchant is solely responsible to purchasers for the care and quality of the advertised goods and services.

Satch: what fans call Joe Satriani
Satch’s Style(s): The guitar virtuoso adapts a technical legato technique (hammer-ons, pull-offs, not for the arthritic) during his fast passages, two-handed and arpeggio tapping when he’s taking it easy, and a whiplash alternative and sweep picking when he wants to melt someone’s face off.
Satch’s Influences: Jimi Hendrix, Brian May, Eric Clapton, Jimmy Page, Jeff Beck, and Allan Holdsworth
Satch’s Disciples: He taught Metallica’s Kirk Hammett, Primus’s Larry LaLonde, jazz-fusion guitarist Charlie Hunter, and fellow virtuoso Steve Vai how to play.
Satch’s Successes: He’s the biggest-selling instrumental guitarist of all time (with over 10 million albums sold); he has his own series of guitars, amps, and pedals; and he’s played gigs as lead guitarist for Mick Jagger, Deep Purple, and Chickenfoot.
Satch’s Snub: He’s been nominated for 15 Grammys, giving him the second most nominations without winning of any artist.
Satch’s Cause for Celebration: It’s the 30th anniversary of his debut album, Not of the Earth, and he’s commemorating the occasion with a retrospective tour spanning his entire career.
Satch’s Show: Expect favorite jams from every album, including his breakthrough, Surfing with the Alien, and 2015’s Billboard success, Shockwave Supernova; some tracks that Joe hasn’t played live in 20 years; and solid backup from longtime collaborators Marco Minnemann (drums), Bryan Beller (bass), and Mike Keneally (keyboards).