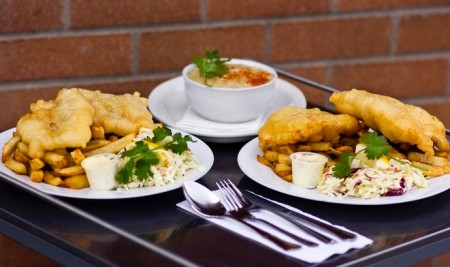 Reminder Update: I originally posted about this deal yesterday. Here’s a reminder that it’s still available to buy today. This deal is a hot seller! At the time of this post, they have already sold over 825+ vouchers so don’t miss out!

With today’s Groupon delicious deal to Sea Fish n’ Chips, for only $15, you can get Seafood Meal for Two or $30 for Four! That’s a saving of 46% Off! You may buy 1 vouchers for yourself and 1 as gifts & the Promotional value expires 90 days after purchase.

This deal is a very hot seller. Groupon has already sold over 825+ vouchers at the time of this post.

In a Nutshell
Seafood restaurant with trademark fish and chips as well as calamari, chowder, and more

The Fine Print
Promotional value expires 90 days after purchase. Amount paid never expires. Limit 1 per person, may buy 1 additional as a gift. Limit 1 per visit. Valid only for option purchased. Valid for dine in only. Not valid for Jaws. Valid for 1pc or 2pc Fish and Chips plates. Extra fee for 3pc plates or upgrading to halibut. Merchant is solely responsible to purchasers for the care and quality of the advertised goods and services.

If the name Sea Fish n’ Chips doesn’t adequately hint at this restaurant’s London leanings, then a dish called Squid Vicious certainly does. The eatery’s take on calamari has about as much attitude as a Sex Pistols song, thanks to fiery licks of salsa and red-pepper aioli. Of course, the restaurant’s namesake dish is its true specialty. Baskets are built from one of four fish—haddock, cod, halibut, or salmon—prepared in a light British–style batter and served with fresh-cut chips and homemade curry sauce. England’s hardly the only destination inspiring the menu, though. Take a look at what other regions are represented:

New England: The restaurant’s seafood chowder comes with or without oysters and is paired with garlic toast. The menu also boasts crab cakes.

Calgary—of course: The restaurant proudly reps local microbrewery Wild Rose, keeping four of those beers on tap, including an IPA and the chocolate-infused Best Brown in Town. Either one pairs nicely with poutine.