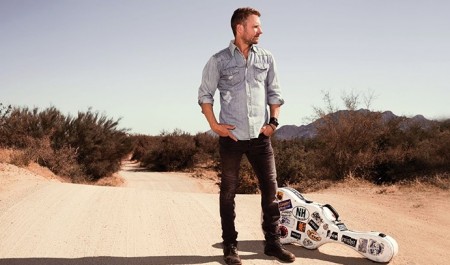 The Groupon Deal
One G-Pass to see Dierks Bentley
When: Monday, October 20, at 7:30 p.m.
Where: Scotiabank Saddledome
Door time: 6:30 p.m.
Ticket values include all fees.

This is a limited 2-day only sale that will expire at midnight on Saturday, September 13, 2014.

The Fine Print
Expires Oct 20th, 2014. Limit 8 per person. Valid only for option purchased. Not redeemable on mobile app. Use for admission at Scotiabank Saddledome on 10/20. Refundable only on day of purchase. Must purchase together to sit together. Doors open 1 hour before showtime. Merchant reserves the right to substitute closer seat assignment. For ADA accommodations, call box office immediately after purchase – availability is limited. Holder assumes all risk in connection with the event and releases Groupon, Live Nation, the venue and their affiliates from any related claims. Merchant is solely responsible to purchasers for the care and quality of the advertised goods and services.

Dierks Bentley, the man: Grammy-nominated singer-songwriter equally at home at Lollapalooza as the Grand Ole Opry
Dierks Bentley, the sound: a down-to-earth lyricism
Dierks Bentley, the hit-maker: his chart-topping singles include rollicking story-song “What Was I Thinkin,'” “Every Mile a Memory,” and “Home” from his seventh top-ten album of the same name
Dierks Bentley, the history-maker: he’s the third-youngest artist ever to be inducted into the Grand Ole Opry
Randy Houser, the songwriter: he co-wrote the massive country hit “Honky Tonk Badonkadonk” with Trace Adkins, and has also penned songs for stars such as Justin Moore and Jessie James
Randy Houser, the singer: he’s the pen and the voice behind “Runnin’ Outta Moonlight,” “Boots On,” and “How Country Feels”
Tim Hicks, the songwriter: he crafts twangy party anthems laden with humor and barroom grit, including “Get By,” “Hell Raisin’ Good Time,” and “Buzz, Buzz, Buzzing”
Tim Hicks, the award-winner: he just won the 2014 Canadian Country Music Association Awards for “Rising Star,” although he jokes, “It took me 20 years to be a rising star.”