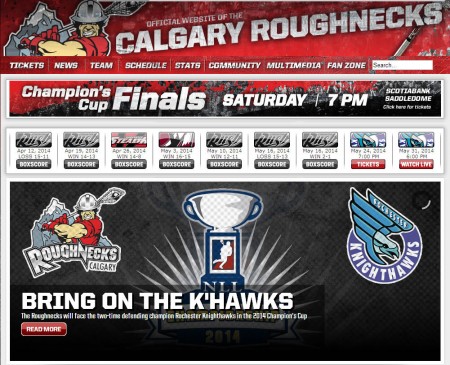 Our Calgary Roughnecks Lacrosse team have advanced to the Champion’s Cup Finals!  The Roughnecks will take on the Richester Knighthawks  on Saturday, May 24 at 7:00pm at the Scotiabank Saddledome!

I’m a Flames Season Ticket Holder and they sent me an email with a promo code that’ll save up to 40% off Champion’s Cup Finals tickets! It’s a generic promo code so I don’t think the Flames or Roughnecks will mind if I share it. The code is “COFRED” and it’ll save up to 40% off game day pricing! Tickets are selling fast, but there’s still some good seats left. This game will sell-out.

Thank you for being a Flames Season Ticket Holder!

The Calgary Roughnecks will open the 2014 National Lacrosse League Champion’s Cup final against the two-time defending champion Rochester Knighthawks on Saturday, May 24 at 7:00pm at the Scotiabank Saddledome. This Saturday marks Game 1 of the two-game championship series and the first time the two clubs have faced each other in the post-season.

We would like to offer you Flames Season Ticket Holder pricing for this game – a savings of up to 40% off game day pricing!

To buy your tickets, click below and use the Flames Season Ticket Holder Offer Codeon the Ticketmaster page.

Your Offer Code is COFRED
code is case sensitive