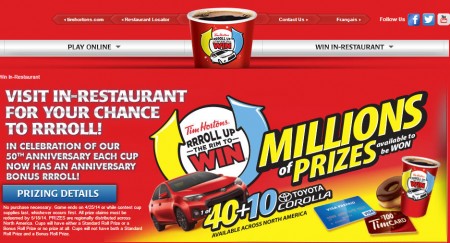 Tim Hortons‘ popular ‘Roll Up the Rim to Win’ promotion is back! The promotion started yesterday and goes until April 25, 2014 or while contest cup supplies last.

You have a 1 in 6 chance to win something. In celebration of Tim Hortons’ 50th Anniversary, each cup now has an anniversary bonus rrroll!

Here’s a list of the prizes that you can win:

If you’re not familiar with Tim Hortons Roll Up the Rim to Win promotion, when you purchase a hot beverage in Canada or in the U.S., you can roll up the rim on the cup to see if you’ve won a prize.