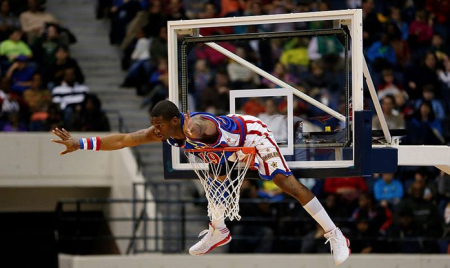 Reminder Update: I originally posted about this deal yesterday. Here’s a reminder that it’s still available to buy today. This deal is a hot seller! At the time of this post, they have already sold over 400+ vouchers so don’t miss out!

Today’s Groupon Calgary Daily Deal of the Day: Harlem Globetrotters Game – $25 for One G-Pass at the Scotiabank Saddledome on Thursday, March 6, at 7 p.m. (Up to 41% Off)

This deal will likely sell out quick so buy now while you still can.

This is a limited 6-day only sale that will expire at midnight on Sunday, March 2, 2014.

The Fine Print
Expires Mar 6th, 2014. Limit 8/person. Valid only for option purchased. Groupon not redeemable with mobile app. Use for admission at Scotiabank Saddledome on 3/6/14. Must show valid ID matching name on Groupon. Refundable only on day of purchase. Must purchase together to sit together. Discount reflects Harlem Globetrotters’ current ticket prices – price may differ on day of event. Merchant reserves the right to substitute closer seat assignment. Merchant is solely responsible to purchasers for the care and quality of the advertised goods and services. See the rules that apply to all deals.