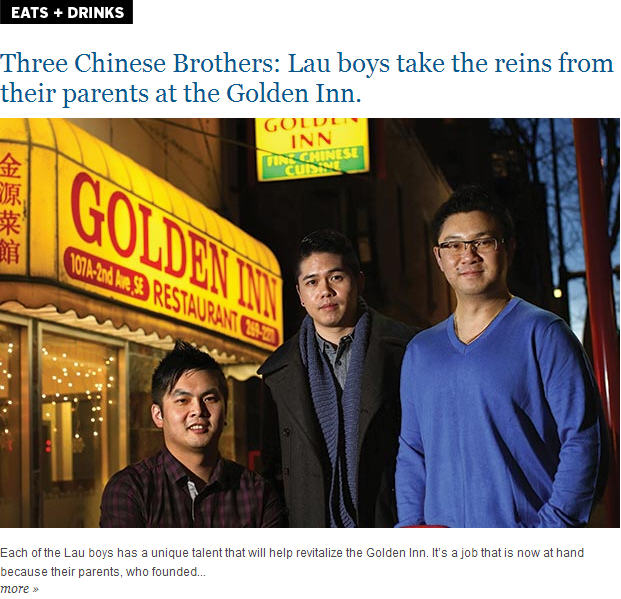 Calgary restaurant reviewer John Gilchrist recently interviewed my two brothers and I about our family restaurant (Golden Inn) in Chinatown. Look for the article in today’s Calgary Herald and Swerve Magazine (Friday, January 24, 2014). It’s a well written article that gives you a peek into my personal life and what I do in addition to Calgary Deals Blog.

Chinatown’s Golden Inn was one of the many Calgary restaurants hit hard by June’s flood. Started by his parents in 1977, son Raymond Lau talks about helping his parents rebuild the well known establishment after the waters subsided.

Raymond Lau’s earliest memories are of playing with his brothers Kelvin and Vincent in Golden Inn, their parents’ Chinatown restaurant. It was where they went after school and on weekends, tended to by the staff, all of whom they’re related to in one way or another. He remembers his parents, John and Kam, being in the restaurant every day, even when they were sick, putting in endless hours.

Raymond also remembers his early working days at Golden Inn, bussing tables from the age of 10, working his way up to dishwasher, doing any task his parents set for him. It instilled in Raymond a lifelong urge to run his own restaurant some day. He even left the family business for five years, working in different restaurants, learning how other food outlets work. Then marriage, a newborn and a burgeoning Internet marketing business took him further from Golden Inn.

Meanwhile, Kelvin was equally entranced by the restaurant business. But for him it was all about the kitchen, the cooks and their tools. He enrolled in SAIT’s professional-cooking program and set about working in local restaurants. He’s cooked at Joey’s, Olives and Model Milk and is now head chef at the National Beer Hall on 17th Avenue S.W.

Vincent also went to SAIT, but studied graphic design. He now works for a Chinatown company designing menus and graphics for many of the restaurants there.

So, before the Great Flood of 2013 none of the brothers was deeply involved in Golden Inn. On that fateful day, much of Chinatown, including Golden Inn, was submerged. The restaurant’s basement filled with water, destroying all the supplies the Laus had just laid in for Stampede. Raymond received a call from his parents telling him the restaurant was flooded. At first he thought his parents might be over-stating the damage, but when he went down the next morning, a quick look confirmed the situation was worse than he expected. Golden Inn would be out of business for months.

The Laus wanted to see Chinatown reborn, fresher and better than ever. They cleaned their restaurant, helped their neighbours and brought in repair crews. And they saw other community members returning and pitching in. John and Kam are looking toward retiring in the near future as Raymond takes an active role in managing Golden Inn. “I don’t have any kind of title,” he says. But some day soon it will be his kids playing in the restaurant.

Kelvin and Vincent will be chipping in, too. Kelvin will consult on new dishes that will move Golden Inn into a contemporary Chinese mode. Vincent has created new menus and window graphics along with a new website for the restaurant. Soon, the brothers will launch into the current age of the restaurant business, becoming the next generation of Chinatown entrepreneurs.

“Our parents don’t even know what social media is,” Raymond says. “Let alone how to use it. We’ll respect what they’ve built at Golden Inn, but it’s time to modernize.”

Click here to watch the video interview and read the full article.