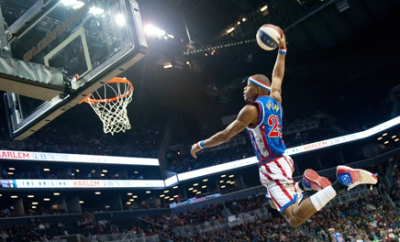 Magic Passes grant access to a special 30-minute exhibition of tricks and hands-on basketball fun with the players 90 minutes before the game; pass holders also get the chance to meet the Globetrotters and their mascot, Globie, and to collect autographs.

This is a limited 1-week only sale that will expire at midnight on Sunday, September 29, 2013. Click here to buy now or for more information about the deal. Quantities are limited so don’t miss out!

The Fine Print
Expires Mar 6, 2014
Limit 8/person. Valid only for option purchased. Groupon not redeemable with mobile app. Use for admission at Scotiabank Saddledome on 3/6/14. Must show valid ID matching name on Groupon. Refundable only on day of purchase. Must purchase together to sit together. Discount reflects Harlem Globetrotters’ current ticket prices – price may differ on day of event. Merchant reserves the right to substitute closer seat assignment. For ADA accommodations, call box office promptly upon receipt of voucher – availability is limited.

Since forming in the 1920s, the Harlem Globetrotters have continued to entertain millions of parents, children, and general basketball admirers with a trademark blend of athletic precision and razzle-dazzle showmanship. For the team’s 2014 tour, a rotating roster of Globetrotter favorites—including three female players—takes to the hardwood each game. Spectators might spot veteran guard TNT sharing a behind-the-back pass with dunker Quake, whose high jump once cleared 7 feet, cruelly dashing his dreams of working in a ceiling-fan store. The Globetrotters might also present a study in contrasts with 5-foot-2 Too Tall and 7-foot-4 Stretch, the team’s tallest member.