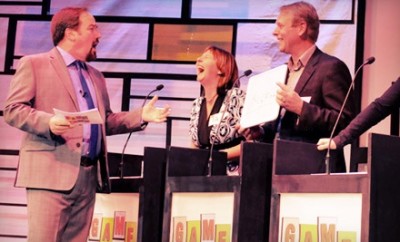 This is a limited 3-day only sale that will expire at midnight on Saturday, April 13, 2013. Click here to buy now or for more information about the deal. Quantities are limited so don’t miss out!

The Fine Print
Expires Apr 14, 2013
Limit 6 per person. Reservation required. Valid only for dinner buffet. Not valid for alcohol. Guests may be seated at tables with other customers.

Dinner performances begin with a 120-item buffet, where sushi and sashimi mingle with sautéed moshi duck, roasted vegetables, and Alaskan snow crab. After desserts of caramel-apple cheesecake, the curtain rises on Game Show, where Richard Karn of Home Improvement and Family Feud fame steps into the role as host. With affable banter and genteel charm, Karn plucks people from the audience to play in a trivia contest produced by a cast of actors. Contestants vie for actual prizes, while onlookers play the part of studio audience, witnessing behind-the-scenes comedy, twists, and backstabbing during staged commercial breaks. Playgoers may be sharing tables with their fellow guests and should adhere to a semiformal dress code to inspire extra vigilance against spilling mousse on one’s shirt.