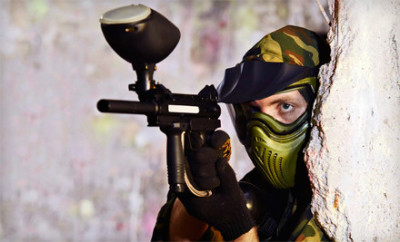 This is a limited 5-day only sale that will expire at midnight on Tuesday, April 2, 2013. Click here to buy now or for more information about the deal. Quantities are limited so don’t miss out!

The Fine Print
Expires 120 days after purchase.
Limit 1 per person, may buy 2 additional as gifts. Valid only for option purchased. Limit 1 per visit. 24-hr cancellation notice required. Reservation required. Must be 18 or older. Must sign waiver. Paintballs not included.

Brightly colored paintballs whiz through fresh lakeside air until they collide with a tree, patch of grass, or someone’s body. On three outdoor fields, this colorful carnage unfolds as mask-wearing participants take aim and fire their semiautomatic paintball guns from lookouts, behind bunkers, and under trees. Sylvan Lake Paintball’s grounds also house a pro shop staffed by seasoned paintballers, where patrons can load up on everything from paintballs and CO2 canisters to barbecue burgers not booby-trapped with a surprise paintball filling.