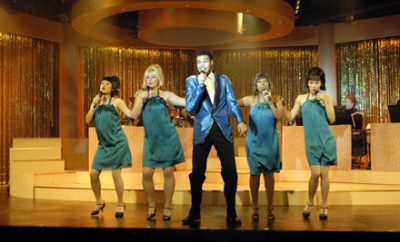 This deal is going to be a hot seller. All previous Stage West deals sell-out very quickly so if you`re interested in this deal, I suggest you buy it ASAP before it sells out.

This is a limited 5-day only sale that will expire at midnight on Tuesday, January 29, 2013. Click here to buy now or for more information about the deal. Quantities are limited so don’t miss out!

In a Nutshell
The musical revue celebrates artists with hit singles; before curtain, diners sample a 120-item global buffet

The Fine Print
Expires Jan 31, 2013
Limit 6 per person. Reservation required. Valid only for dinner buffet. Not valid for alcohol. Guests may be seated at tables with other customers. Seating options discussed at time of booking; call ahead for seating availability.

On Thursday, January 31, general-admission seating for a 120-item buffet—where sushi and sashimi mingle with rosemary-crusted turkey, roasted vegetables, and Alaskan snow crab—starts at 6 p.m., and the show starts at 7:45 p.m. When the curtain rises, the cast of Two Hit Wonders pays loving tribute to the artists who scored Billboard gold twice before disappearing from the scene. Playgoers may be sharing tables with their fellow guests and should adhere to a semiformal dress code to inspire extra vigilance against spilling mousse on one’s shirt.