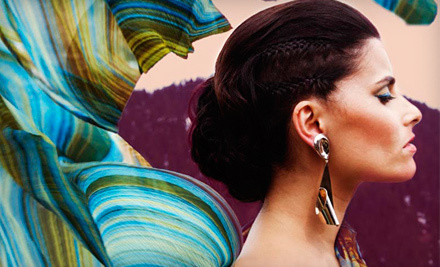 Because the ticket is a G-Pass, Groupon customers can use it to enter the venue directly; they will not need to redeem their Groupon at will call.

This is a limited 3-day only sale that will expire at midnight on Thursday, December 20, 2012. Click here to buy now or for more information about the deal. Quantities are limited so don’t miss out!

The Fine Print
Expires Jan 12, 2013
Limit 6 per person. Valid only for option purchased. G-Pass not redeemable with mobile app. Use for admission at Southern Alberta Jubilee Auditorium on 1/12 at 7:30PM. Must show valid ID matching name on Groupon. Must provide first and last name upon purchase, which Groupon will provide to facilitate redemption. Refundable only on day of purchase. Must purchase together to sit together. Discount reflects Live Nation’s current ticket prices – price may differ on day of event. Doors open 1 hour before showtime.

In 2000, “I’m Like a Bird” hit the radio and sent Nelly Furtado, a Canadian singer-songwriter with Portuguese heritage, soaring into the spotlight. Over rich, warm strings and chimes, the indelible refrain broadcast a free-spirited ambition held in tension with a surprisingly complex sense of melancholy. Although the hit single contributed to her debut album’s success, Whoa, Nelly! stood out as a whole for its mix of bossa-nova-tinged R&B overlaid with a voice that constantly shape-shifted between bubbly sweetness and a tougher, more conversational style. As singles such as “Turn Off the Light” and “On the Radio (Remember the Days)” topped the pop charts, Nelly’s sultry neo-hippie style dominated magazine covers.

In 2006, a dance-diva makeover heralded her sexually charged album Loose, whose beat-heavy, Timbaland-produced tracks contributed to the evolution of her personal and musical style. This fall saw the release of The Spirit Indestructible, a playful and intensely rhythmic collection of songs that touches on the pleasures of wearing giant earrings and killing time in parking lots alongside loftier concerns. The Los Angeles Times described the record as “a thick, jam-filled joyride with more emotional heft than all her peers save maybe Beyoncé,” confirming Furtado’s status as “one of the more innovative and adventurous pop singers in North America.” On her tour, audiences can expect to hear new material such as “Big Hoops (Bigger the Better)” and hits such as “Maneater,” a pop anthem about overcoming the urge to bite the mailman.