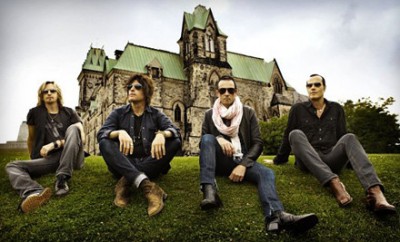 This is a limited 3-day only sale that will expire at midnight on Saturday, September 8, 2012. Click here to buy now or for more information about the deal. Quantities are limited so don’t miss out!

The Fine Print
Expires Sep 11, 2012
Limit 8 per person. G-Pass not redeemable with mobile app. Use for admission at MacEwan Hall on 9/11 at 7PM. Must show valid ID matching name on Groupon. Must provide first and last name upon purchase, which Groupon will provide to facilitate redemption. Refundable only on day of purchase. Discount reflects Ticketmaster’s current ticket prices – price may differ on day of event. Doors open 1 hour before showtime.

During concerts, diehard fans like to be close enough to their favourite band to catch the drummer’s stick or the bassist’s cold. Crowd-surf to the front row with this GrouponLive deal to see Stone Temple Pilots at MacEwan Hall. For $42, you get one G-Pass for general admission on Tuesday, September 11, at 7 p.m. (up to a $71 value, including fees). Doors open at 6 p.m. Because the ticket is a G-Pass, Groupon customers can use it to enter the venue directly; they will not need to redeem their Groupon at Will Call.

In the time between their 1993 debut, Core, and their 2001 album, Shangri-La Dee Da, Stone Temple Pilots kept radio stations well-fed with the gritty, grunge-flavoured arena rock heard in instant classics such as “Interstate Love Song,” “Plush,” and “Wicked Garden.” Fans then endured Stone Temple Pilots’ near-decade-long absence before the band grabbed its guitars, re-Sharpied its tattoos, and reunited for its sixth, self-titled album in 2010. The record shot to No. 2 on the Billboard 200 behind infectious singles such as “Between the Lines,” whose unabashed chorus declares, “You were always my favourite drug/Even when we used to do drugs.” When the new collection of songs was released, Spin’s William Goodman raved, “The new album is classic STP. Its 12 tracks have the band’s signature blend of tuneful melodies and rock guitar crunch, psychedelic solos, and impressive crooning courtesy of Scott Weiland.”

Scott Weiland, Eric Kretz, and Robert and Dean DeLeo have continued their momentum in their live shows, working the crowd with a mix of beloved hits and newer songs. Before Stone Temple Pilots command the stage, the Crash Kings showcase their loud and proud rock ‘n’ roll. Bluesy drums, pounding keys, and a big-bellied bass lay the foundation for singer Tony Beliveau’s Jack White–evoking yowl on “Mountain Man,” and the slower “Come Away” reels in the roaring rhythm section for a pleading, heartfelt love song.