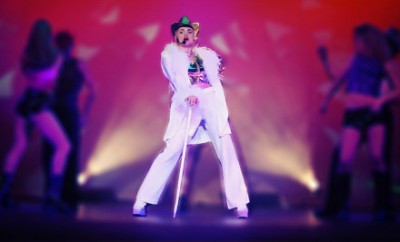 Today’s Groupon Calgary Daily Deal of the Day: Stage West Theatre Restaurant: $48 for “A Tribute to Madonna” Musical Revue with Dinner on August 22 or 23 (50% Off)

This is a limited 5-day only sale that will expire at midnight on Tuesday, August 21, 2012. Click here to buy now or for more information about the deal. Quantities are limited so don’t miss out!

The Fine Print
Expiration varies
Limit 6 per person. Valid only for option purchased. Reservation required. Valid only for 120-item dinner buffet. Not valid for alcohol. Tables may be shared with other guests.

Choose between the following performances of A Tribute to Madonna:

General-admission seating for a 120-item buffet—where sushi and sashimi mingle with teriyaki beef, roasted vegetables, and Alaskan snow crab—starts at 6 p.m., and the show starts at 7:45 p.m. When the curtain rises, a tribute artist surrounded by costumes and backup dancer covers Madonna’s greatest hits and most scandalous talk-show interviews. Playgoers may be sharing tables with their fellow guests and should adhere to a semiformal dress code to inspire extra vigilance against spilling mousse on one’s shirt.

Stage West Theatre Restaurant has been a beacon of dining and dramatics in Calgary for 30 years. General Manager Gary Tse and culinary wizard Chef Tsoi collaborate to create a night to remember six days a week, and the stage has been staffed with such stage-and-screen stars as Mickey Rooney, Abe Vigoda, Loretta Swit, and Sherman Hemsley. The company’s history has seen more than 10,000 season subscribers, of whom more than 100 have continued to subscribe each year since the first production. They take in the wide-ranging cuisine and entertainment from an intimate 400-seat, ramped, tiered theatre designed for uniformly clear sightlines and maximal accessibility to patrons who prefer to somersault to their seats.