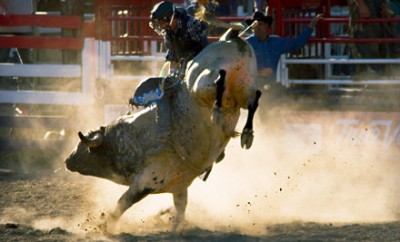 This is a limited 5-day only sale that will expire at midnight on Friday, July 6, 2012. Click here to buy now or for more information about the deal. Quantities are limited so don’t miss out!

Celebrating the 100th anniversary of the Calgary Stampede, Osteria De Medici’s VIP tent surrounds attendees with music, food, and daily events. The unique open-air tent lets attendees enjoy the festivities without hiding from the sun’s merry rays, and VIP passes allow guests to forgo cover charges and skip lines without resorting pogo-stick-assisted entries through the tent’s retractable roof. Once inside, patrons can chow down on gourmet Italian food or listen to a lineup of ear-tickling melodies crafted by such artists as Canadian Idol finalist Amber Fleury (July 5, 13, and 14). The local Big Yellow Van Band rocks out with four-piece aplomb July 6, 9, and 11, and the Bow River Band sets toes tapping with folksy homages to their patron body of water July 7 and 8. In addition to the festival’s live music, July 10 and 12 set the airwaves bouncing with the turntable stylings of DJ Bill Yorke.

Named as an homage to the House of Medici—a wealthy 14th-century family that influenced and funded the flourishing of Italian arts, culture, and cuisine—Osteria De Medici flung open its doors open in 1989. The brainchild of Antonietta and Rocco Terrigno, the family-run restaurant now also employs their sons, Maurizio and Mike, and Rocco acts as master chef, curating a vast menu of refined Italian cuisine and a well-stocked wine cellar. Each sharing a love and passion for cooking from a young age, Antonietta and Rocco have refined their culinary skills across more than 40 years spent in kitchens across the world, and have catered to A-listers such as Anthony Hopkins, Isabella Rossellini, and the hands that operate Kermit the Frog.