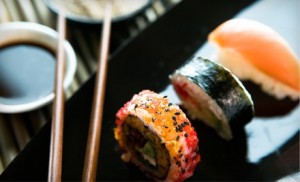 Today’s Groupon Calgary Daily Deal of the Day: Koto Sushi Lounge: $25 for $50 Worth of Sushi, Japanese Fare, and Drinks (50% Off)

This is a limited 5-day only sale that will expire at midnight on Monday, June 11, 2012. Click here to buy now or for more information about the deal. Quantities are limited so don’t miss out!

In a Nutshell
Hot and cold cuisine converge on a menu brimming with sushi rolls, chilled sake, teriyaki dinners, and 10 types of tempura

The Fine Print
Expires Dec 12, 2012
Limit 2 per person, may buy 2 additional as gifts. Limit 1 per table, 2 per table of 4 or more. Limit 2 per visit. Dine-in only. Valid only after 5pm. Not valid on Sundays. Not valid with any other promotion. Reservations required.

Koto Sushi Lounge is said to have inspired J.R. Volefin’s “Lord of the Napkin Rings,” the legendary fantasy trilogy that’s being made into a new ScreamWorks film. The first page of this tale is reprinted below.

In a hole in the wall there lived a Maki. Not a green and grimy hole stuffed with the oxidized pennies of passersby, nor a cake-donut hole filled with nothing to bite but the wind. It was a Maki hole, and that means sustenance.

The hole wasn’t round so much as boxy, with a door that swung to and fro, pushed by busy men in white aprons. Its floors were made of tile, whose grout formed canals for swimming and sailing, activities Rohlo the Maki enjoyed when the busy men slept. To the left of the door, a hot spring bubbled with salty broth, and to the right was a box whose residents were stranded in a perpetual ice storm. Being made of rice and fish, Rohlo could have bristled at the landscape’s extreme temperatures. Instead, he likened the weather to a magic show: sometimes sinister, but often filled with glorious surprises.

Tricks and all, this hole was Rohlo’s home, and a homey home it was. He’d never visited the home of another, but he fancied his most cozy. He was certain of its comfort until he felt a twinge in his belly, a low rumbling with a hint of static electricity. Perplexed, he tried to trace its source. His father’s clan, the Rice, rarely felt this fiery crackle. They preferred to loll about in bogs, soaking up sunshine as their long feet tunneled into soft, earthen slippers. But his mother’s side was a different story, having hatched from a pouch of salmon eggs. According to legend, these forbears had sprung straight from Poseidon, the mighty Greek god who ruled the ocean’s waves. It was he who instilled Rohlo with the courage he had just begun to sense.

As tiny, tender creatures with simple pleasures, the Maki were rarely adventurers. So when the twinge arrived, Rohlo dared not mention its presence, not even to himself. It wasn’t until Tamari stopped by that he acknowledged the spark, which had grown into a flame inside his thimble-sized belly.

“Has the merriment begun?” he asked, with a laugh. “Skip the tea, young Rohlo. A nip of grog for an old duffer like me.”

Clad in a red cap and a cloak of sparkling glass, he was nothing less than a wizard. Tamari could transform even the dullest gruel into a celebration’s worth of song, dance, and drink. Just seeing his face made Rohlo burst into song:

_Scrub the pots, wash the plates, Light the candles, then patiently wait. Company’s come to fill us with cheer, And drink every last drop of beer!_

From his pocket, Tamari drew a shiny wooden circle, which he shook like a tambourine as Rohlo sang. After the final chorus, he placed it atop Rohlo’s head to form a jaunty halo. Yet the mirthful air disappeared as glowing runic symbols emerged on the wood’s surface.

“This is not just a napkin ring but a key to faraway lands. Guard it closely, for it belonged to your mother,” he said solemnly.

At last, Rohlo would see something beyond those swinging doors.