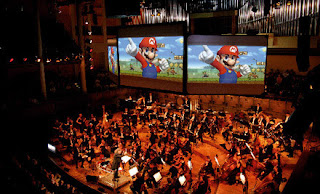 Choose from the following showtimes:

This is a limited 3-day only sale that will expire at midnight on Monday, May 7, 2012. Click here to buy now or for more information about the deal. Quantities are limited so don’t miss out!

In a Nutshell
Live orchestra performs music from games such as Super Mario Bros. and World of Warcraft with pre-show festival and costume contest

Led by the sweeping baton of conductor Andy Brick, the Calgary Philharmonic Orchestra has traversed the globe to pay homage to computerized compositions with Play! A Video Game Symphony. Recognizable suites from beloved games reverberate off the spruce wood canopy of Jack Singer Concert Hall, coming to life under virtuosic strings, brass, and woodwinds backed by thunderous percussion. The whimsical blips of Super Mario Bros. transform into full-bodied bursts of euphony, and the musicians further elevate the cinematic scope of the scores from World of Warcraft and The Legend of Zelda. Giant video screens display colourful graphics and game footage during the show, bringing to mind childhood afternoons on the couch and ill-fated campaigns for mayor of Sim City. Before the performance, a festival and costume contest get audiences in the mood for the aural and visual spectacle to come.