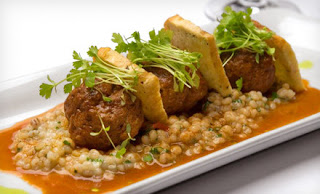 Today’s Groupon Calgary Daily Deal of the Day: Il Sogno: $20 for an Upscale Italian Cuisine (50% Off)

This is a limited 4-day only sale that will expire at midnight on Friday, June 1, 2012. Click here to buy now or for more information about the deal. Quantities are limited so don’t miss out!

The Fine Print
Expires Dec 5, 2012
Limit 1 per person, may buy 2 additional as gifts. Limit 1 per table. Valid only for option purchased. Reservation required; subject to availability. Dine-in only. $120 option valid only for tables of 4 or more. Not valid for daily food or drink specials.

Restaurant celebrates its 12th anniversary as meals begin with small orders of lamb meatballs over creamy barley risotto ($12.99 at lunch; $13.99 at dinner), then transfer attention to plates of handmade pasta, such as ricotta gnocchi with house Italian-style sausage ($16.99), and entrees that include seared Pacific scallops over braised oxtail, a potato puree, peas, and carrots ($32.99, only at dinner).

After graduating from the SAIT Culinary Institute, Robert Fedosoff embarked on a five-year journey around the globe, living and working in restaurants in New Zealand, London, and France. Returning to his native Calgary with a diverse culinary arsenal, he accepted the position of executive chef at Il Sogno, where he combines European cooking techniques and Italian traditions to create a menu that’s filled with contemporary preparations, such as a duck liver parfait with fig preserves, watercress, and pickled shallots.

Over the last decade, Il Sogno has received a multitude of awards, including the Consumers Choice Best Italian Award in 2010 and the Four Diamond Award by the CAA/AAA in 2009, as cited by a glowing feature in Notable. Beneath 14-foot pressed-tin ceilings, servers transport dishes of braised duck, house-made pasta, and seasonal seafood through what has been lauded as one of Calgary’s most romantic dining rooms. An extensive selection of cocktails and spirits originate from the bar, and a wine list offers well-suited pairings for appetizers, entrees, and white shirts.