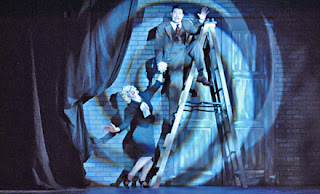 This is a limited 3-day only sale that will expire at midnight on Thursday, March 15, 2012. Click here to buy now or for more information about the deal. Quantities are limited so don’t miss out!

The Fine Print
Expiration varies
Limit 6 per person. Valid only for date purchased. Tickets must be purchased in multiples of 2. Reservation required by 3/16 for 3/20 show, 3/28 for 4/1 show. Not valid for the purchase of alcohol.

Choose between the following performances:

In this farcical adaptation of the Hitchcock masterpiece—praised by the New York Times as an “absurdly enjoyable, gleefully theatrical riff”—a frenetic cast of four dons the hats of more than 150 characters tangled up in international intrigue. Embroiled in a fight at a theatre performance, everyman Richard Hannay is unexpectedly tied up in a conspiracy involving missing fingers, photographic memories, and an uncannily familiar string of beautiful women who may or may not be on his side.

As reported in the Calgary Sun, director Mark Bellamy first helmed the piece as a hit show at Vertigo Theatre before remounting it with a “talented, inventive, and tireless” cast at Stage West. Before the show, patrons browse a 120-item buffet where Asian noodle dishes mingle with Mexican mole and Alaskan snow crab. Playgoers may be sharing tables with their fellow guests, and should adhere to a semi-formal dress code to inspire extra vigilance against spilling mousse on one’s shirt.