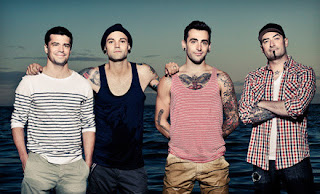 Today’s Groupon Calgary Daily Deal of the Day: Hedley: $23 for One Ticket to See Hedley at the Scotiabank Saddledome on March 20 at 7 p.m. (50% Off)

This is a limited 2-day only sale that will expire at midnight on Friday, February 3, 2012. Click here to buy now or for more information about the deal. Quantities are limited so don’t miss out!

The Fine Print
Expires Mar 20, 2012
Limit 4 per person. Valid only for option purchased. Redeem starting 2/7 for ticket at box office. Must show valid ID matching name on Groupon at Scotiabank Saddledome. Must provide first & last name at checkout, which will be provided to Scotiabank Saddledome. Refundable only on day of purchase. Must redeem together to sit together. Discount reflects Live Nation’s current prices-price may differ on day of event. Parking not included.

Today’s GrouponLive deal to see Hedley at the Scotiabank Saddledome on Tuesday, March 20, at 7 p.m. Doors open at 6 p.m. Choose between the following options:

Vancouver-bred rockers Hedley continue their cross-Canada Shipwrecked tour, rousing an ever-growing regiment of fans with a fresh batch of chart-topping hits from their latest album, Storms. On the heels of three consecutive double-platinum releases, including 2009’s The Show Must Go, the explosively popular foursome have sustained their supersonic ascension to stardom with introspective anthems and jet packs attached to their tour bus. Lead singer Jacob Hoggard, who utilized the song-writing prowess of Grammy Award–winning artist Babyface on Storms, quarterbacks such rapid-fire mantras as “Invincible” and “One Life.”, The band has also created a record-setting 10 consecutive number-one videos according to Much Music, further cementing their celebrity and status as most sought after yearbook signature. To start the high-energy evening, groups Classified, Anjulie, and My Name is Kay storm the stage, determined to get feet moving with dance-packed sets and stadium-wide games of Red Rover.