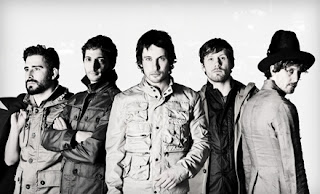 This is a limited 1-day only sale that will expire tonight at midnight (Thursday, October 13, 2011). Click here to buy now or for more information about the deal. Quantities are limited so don’t miss out!

The Sam Roberts Band rouses crowds with a freewheeling pop-rock sound influenced by traditional country and classic rock. Primary singer and songwriter Sam Roberts crafts his indie tunes by crooning to the pulse of his rhythmic guitar strumming, Josh Trager’s drum fills, and the warning beeps of his reversing tour van. Each charisma-filled set delivers tracks from the band’s 2011 release Collider, including the horn-filled opener The Last Crusade and the triumphant No Arrows, a ballad about a useless GPS. Opening the evening’s aural autobahn, Zeus—the original backing band for Broken Social Scene member Jason Collett—churns out tracks from its debut EP with fuzzy guitar tones, catchy choruses, and shredding triangle solos.