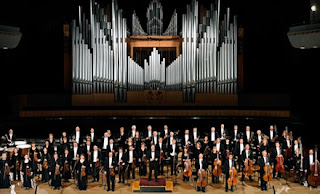 This is a limited 3-day only sale that will expire at midnight on Thursday, October 6, 2011. Click here to buy now or for more information about the deal. Quantities are limited so don’t miss out!

In a Nutshell
Under conductor Roberto Minczuk, casual, one-hour concerts delight audiences with works by composers such as Tchaikovsky, Copland & Ravel

The Fine Print
Expires May 10, 2012
Limit 4 per person. Redeem starting 10/4 for a ticket. Must show valid ID matching name on Groupon at box office. Must provide first and last name at checkout, which will be provided to Calgary Philharmonic Orchestra. Refundable only on day of purchase. Must reserve together to sit together. Discount reflects Calgary Philharmonic Orchestra’s current ticket prices-price may differ on day of the event.

With today’s Groupon to the Calgary Philharmonic Orchestra, you can choose between the following options:

Under the graceful baton of music director and conductor Roberto Minczuk, the Calgary Philharmonic Orchestra delights audiences of all ages with a broad repertoire of classical and contemporary orchestral works. A series of casual Rush Hour performances hosted by the CBC’s Katherine Duncan helps patrons scrub ears clear of workaday sounds such as clicking keyboards and gossiping water coolers with mellifluous one-hour concerts. Tchaikovsky on the Edge treats cochleae to a hearty slice of the composer’s moving Symphony no. 6 (“Pathétique”); February’s The Red Violin performance drives away winter’s gray atmosphere with a quartet of colourful stringed pieces including Aaron Copland’s “Fanfare for the Common Man” and Leonard Bernstein’s “Three Dance Episodes from On the Town” bolstered by Donovan Seidle’s fleet-fingered fiddling. Ready hips and shoulders for unfettered shimmying during May’s ¡Viva España! concert featuring a trio of animated Iberian melodies including Rimsky-Korsakov’s Capriccio espagnol, op. 34; Maurice Ravel’s sultry Boléro; and Manuel de Falla’s “Ritual Fire Dance” accompanied by Fred Astaire–shaped flames. To keep audience members in tune with what they’re hearing, the host and the musical director dole a bevy of interesting insights about the evening’s program.