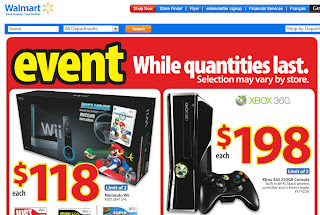 Future Shop and Best Buy have already advertised they will price match Walmart’s prices. I plan on picking up an Xbox 360 this weekend. My current system is having problems reading games and is going to die any day now. I have to whack the top of the console a bunch of times before I can play a game.

Click here to visit Walmart’s website to view their online flyer. They have a bunch of other great deals, but I’ve been looking for the Xbox to go on sale.