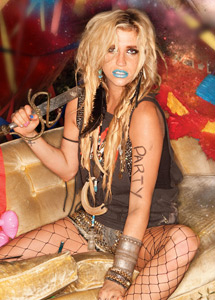 I’m subscribed to Travelzoo‘s Weekly Canada Top 20 deals and this was one of their featured deals.

Ke$ha will be performing at the Scotiabank Saddledome in Calgary on Tuesday, September 6, 2011 at 7:30pm. LMFAO is the opening act for “The Get $leazy Tour”. Click the link below to go to Ticketmaster’s website and enter the promo code “PARTY” to get 30% off tickets!

She is best known for her hit “Tik Tok” … and the clock is now ticking to pick up this deal on Ke$ha in concert at 30% off regular prices as the pop star hits Canada with her latest tour.

Prices are for numbered seats at the Scotiabank Saddledome. There is an extra processing fee of $3 per order.

Ke$ha has become pop royalty in recent months, with an album that went double platinum in Canada and has sold 2 million copies worldwide to date. Her work has been honoured with nominations at the Juno Awards, Billboard Music Awards, People’s Choice Awards, MTV Video Music Awards and others.

Click here to visit TravelZoo for more information about this deal.