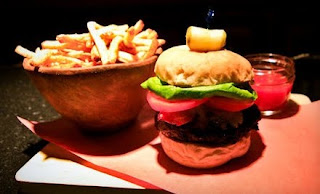 Groupon Calgary Deal of the Day: Three-Course Gastropub Meal for Two or Four

This is a limited 3-day only sale that will expire at midnight on Saturday, August 20, 2011. Click here to buy now or for more information about the deal. Quantities are limited so don’t miss out!

The Fine Print
Expires Feb 21, 2012
Limit 1 per person, may buy 2 additional as gifts. Limit 1 per table. Valid only for option purchased. Reservation available for parties of 8 or more. Not valid for appetizers over $11.50, entrees over $24, and desserts over $6.75.

Today’s Groupon to The District. Choose between two options:

The three-course meal for two includes the following:

The three-course meal for four includes the following:

At The District, executive chef Heather Gould-Hawke constructs tantalizing tower-high burgers and other house-made indulgences from meats and organic produce culled from local farms. The heady scent of the eatery’s house-cured bacon hails guests upon arrival as they ogle chalkboard menus along the brick walls of the casual dining room. Like a chameleon’s foundation colour, The District’s menu changes daily, though popular appetizer offerings may include the West Coast mussels ($11.50) or beef short ribs slathered in a black pilsner and mustard sauce ($10.75). Entrees prolong the home-cooked feast with options such as line-caught halibut ($24) and macaroni and cheese ($16.25), which populates its creamy depths with grilled chicken, organic broccoli, and a secret decoder ring with the encrypted recipe at the bottom. Though not covered by this Groupon, patrons can introduce their entrees to a vast selection of local beers expertly mined from Canada’s underground beer caverns.