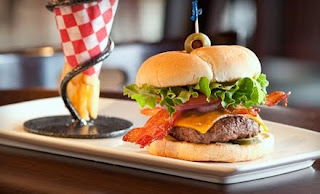 Groupon Calgary Deal of the Day: $29 for Meal for Two with Appetizer, Burgers or Sandwiches, and Beer Sampler (Up to $57.92 Value)

This is a limited 3-day only sale that will expire at midnight on Tuesday, August 30, 2011. Click here to buy now or for more information about the deal. Quantities are limited so don’t miss out!

The Fine Print
Expires Mar 2, 2012
Limit 1 per person, may buy 2 additional as gifts. Limit 1 per table. Dine-in only. Not valid for nacho appetizer.

As Banff’s only microbrewery, Banff Ave. Brewing Company takes a traditional English bent on beer, with a menu to complement multifarious hops. Master brewers fashion up to seven brews from premium international hops, malts, and yeast. The recipes call for glacial mountain water from the Canadian Rockies, which is a reflection of the brewery’s environmental campaign and love for saying “glacial”. Providing a foundation for the liquid sampler, appetizers tickle appetites into submission with indulgences such as the BLT bruschetta with feta, the Maine lobster roll, and the mountain of jalapeno-festooned nachos with house-made salsa. Burgers and sandwiches span a wide spectrum, with shaved turkey and smoked bacon finding a home on a piece of naan in the Turkey Club ($13.99) and the VW Van ($13.99) hosting a plethora of veggies on a sesame seed bun.