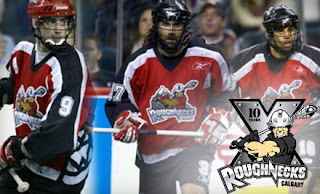 If you have never been to a Calgary Roughnecks lacrosse game before, I highly recommend you check it out. The atmosphere is great, the games are very intense and entertaining. I took advantage of this deal and bought some tickets. I’m a pretty big Roughnecks fan. I had front row glass seats when they won the 2004 Championship game at home.

This is a limited 2-day only sale that will expire at midnight on Monday, January 3, 2011. Click here to buy now or for more information about the deal. Quantities are limited so don’t miss out!

The Fine Print
Expiration varies
Limit 1 per person, may buy multiple as gifts. Valid only for date purchased. Reservation required. Not valid with other offers. Tax included.

Ttoday’s Groupon: for $28, you get two orange seats to see the Calgary Roughnecks play lacrosse at the Scotiabank Saddledome (a $56.50 value including taxes and facility fees). Choose from four dates:

Hailed as 2004 and 2009 National Lacrosse League Champions, The Roughnecks are charging into the 2011 season under the steady command of newly promoted captain Andrew McBride. Grab a friend and join Derrick the Mascot, squealing fans, and misplaced hockey moms to cheer on head coach Dave Pym’s Roughnecks at the start of their 10th year as a franchise.

Reviews
The Calgary Roughnecks have more than 1,700 Facebook fans.