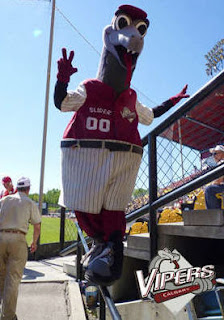 I’m a HUGE sports fan and a long time Flames and Stampeders season ticket holder. I’m a little embarrassed to say that I have never been to a Calgary Vipers or any local baseball game before. I just bought a voucher and will make the effort to check out at least one game this season and support the team.

This is a limited 1-day only sale that will expire tonight at midnight (Wednesday, January 19, 2011). Click here to buy now or for more information about the deal. Quantities are limited so don’t miss out!

Hey batter, batter, batter… Don’t strike out trying to swing tickets to the best ball game in town. Step up to the plate and take a cut at this steal of a deal for tickets to see the Calgary Vipers play at historic Foothills Stadium during the 2011 season. Here’s the windup and the pitch: score two upper-bowl tickets to any Viper’s regular season home game for just $12 (regularly $24), or pick up two lower-bowl seats for $16 (regularly $32). Or if you’d rather bring (and feed) the whole crew, hit a grand slam with four tickets, plus four hot dogs and sodas, for just $35 in the upper bowl, or $45 in the lower bowl (a $76 and $92 value, respectively). With this deal on deck, there’ll be no need for a squeeze play on your wallet to catch the 2009 Golden Baseball League champs in action this season.
Knock an extra $1 off this deal when you “like” the Calgary Vipers on Facebook.