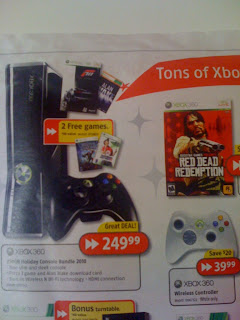 I saw this deal posted on RedFlagDeals.

I’ve been looking for a good deal on a new Xbox 360. My current Xbox has been acting up lately. It’s having troubles reading the discs ever so often and I have to keep banging it until it eventually works. I’m debating about buying this Holiday Bundle for $249.99 or the Xbox 250GB Kinect Bundle for $399.99.

Anyways, here’s the details about this deal:

Click here to read the thread about this deal on Red Flag Deals.