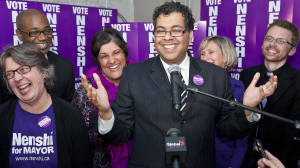 I know this isn’t deal related, but it’s something important to Calgarians. Congratulations to Naheed Nenshi being elected to be Calgary’s next mayor.

Naheed Nenshi is Calgary’s next mayor.

With 236 of 241 polling stations reporting, Nenshi has a lead of nearly 26,000 votes on McIver (39 per cent of the vote versus 32 per cent), while third-place challenger Higgins is even further back (26 per cent). The rest of the 15 mayoral candidates are around one per cent or less in an election that is expected to be a record turnout of slightly more than 50 per cent.

“Today, Calgary is a different place than it was yesterday,” Nenshi told hundreds of raucous supporters late Monday amid a sea of purple at his campaign headquarters. “It’s a better place…”

Calgarians flocked to the polls for what many expected to be the closest mayoral race in potentially decades – as hour-long lineups and a shortage of ballots produced headaches at some polling stations.

Click here to the full article on the Calgary Hearald.

Did you go out and vote? Are you happy Nenshi won?