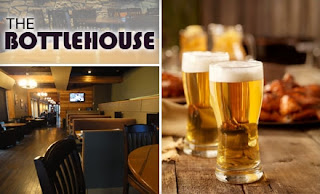 Today’s Groupon Deal: $7 for $15 Worth of Upscale Pub Fare and Craft Beer at The BottleHouse Beer Parlour

This is a limited 1-day only sale that will expire tonight at midnight (Thursday, September 30, 2010). Click here to buy now or for more information about the deal.

The Fine Print
Expires Mar 31, 2011
Limit 1 per person, may buy 3 additional as gifts. Limit 1 per table, 2 per table of 6 or more. Not valid on daily specials. Tax and gratuity not included. Not valid with other offers.

The BottleHouse populates its menu with a small city of aromatic plates and more than 40 varieties of Canadian brewed ales, lagers, stouts, pilsners, IPAs, and more alongside sips from around the world. Grab a few from The BottleHouse’s selection of Canadian microbrews, such as the Powder Hound pilsner from Alberta’s own Grizzly Paw Brewing Company ($5.25) or Unibroue’s La Fin Du Monde ($5.75), or settle in with a draft beer such as What the Huck, a huckleberry wheat ale from Fernie Brewing Co. ($6.25). The Canadian crab cake trio ($9.95) can complement your pour with crispy fried Canadian rock crab cakes hand molded and enlivened with an avocado quenelle. Arcade-game overachievers will want to treat gastro baskets to the street fighter burger ($13.95), a plucking of prime Peruvian beef carrying a protein pack of back bacon, fried egg, and havarti cheese, sprinkled with tortilla strips and, like a Greek god, slathered with flavourful kalamata mayo. A Lethbridge chicken breast stars in the alfredo chicken penne ($13.65), which features white-button mushrooms and julienne onions dancing in and out of garlic-alfredo-laden penne.

Rustic light fixtures, smooth wood furniture, and exposed stone create a laid-back, fun atmosphere within The BottleHouse Beer Parlour. The friendly atmosphere and boatload of beer selections make this spot a suitable site for catching up with old friends, throwing down an ale with coworkers, or devising alibis with co-conspirators.

Reviews
The BottleHouse Beer Parlour was featured on the Food Network blog and are you gonna eat that?, and 92 per cent of Urbanspooners like it.

Click here to buy now or for more information about this deal.